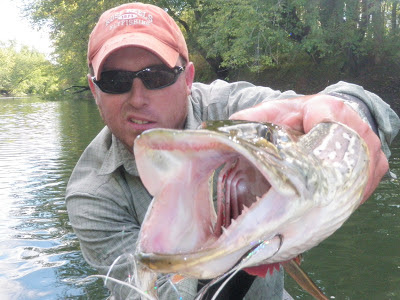 Yesterday a friend of mine, Vermont Fisheries Biologist extraordinaire (and injured hockey star) Shawn Good put up a couple of interesting news articles:

Apparently PETA has been contacting Vermont and asking them to end youth fishing programs because it is teaching children violence (of course the video games that are oh so prevalent these days seem to be acceptable because they do not harm any animals- sarcasm by me). Violence in fishing huh? I haven't seen a lot of violence when drifting nymphs, tossing dries and the like. I won't mention fishing for pike, musky, bowfin and the like... but of course that is violence on the fish's part, not mine... Is that kind of violence acceptable PETA?

I don't work with the group mentioned in the article but I am one of the councilors at Vermont Trout Unlimited Trout Camp. I love to teach youth how to fish. And conservation of fisheries. Funny how I never hear of PETA helping to defend habitat like TU and other "violent" angling conservation groups do. I really look forward to teaching a whole new group of kids our "violent" sport this coming summer.

Shawn then put up this article:

Finally! A definitive study that shows that fish do not have the brain power or basic structures to feel pain or emotions. People, let's face something- they are FISH!

The biggest issue for me with fishing and fish health is proper handling of fish. Most fish are somewhat delicate and need to be handled minimally and with great care especially for their mucus covering and their gills. They also need to be kept in the water as much as possible (which is why I have a lot of issues with bass tournaments but that is another post entirely).

Glad to see that scientists have got this worked out and can hopefully settle the debate somewhat. Here is the long and the short of it from that article:


Jim Rose, professor of zoology and physiology at the University of Wisconsin, who led the project, said: ‘In spite of large injections of acid or bee venom, that would cause severe pain to a human, the trout showed remarkably little effect.’
Fish also resumed normal activity within minutes of surgical procedures, as well as after being caught and released back into the water. Prof Rose added: ‘It is highly improbable that fish can experience pain.


A good friend of mine and I were talking a few weeks ago. I had been bemoaning the fact that I had not been out seriously fishing since November. I was really starting to feel it. I had been pretty stressed about a lot of different things and one of the best releases I have ever found is to get out on the water. My friend Jessy, who is a very interesting guy with an amazing martial arts background, told me about a study that he had read that said that flowing water helped to remove different energies from a person thus helping to alleviate some stresses. I took that as what I have known for a very long time: the current in a river cleanses my soul.

It has been a long winter. For a variety of reasons I have not had the ability to get out fishing(not the least of which is that we had a fairly cold winter which formed a lot of ice). There have been a lot of things weighing me down. My latest birthday had been looming on the calendar and it seemed like I was going to be spending that day alone which should not have been a big deal but I have to admit that it was not something I was looking forward to.  At least the weather seemed like it was going to be gorgeous.

I woke up yesterday morning to some lovely sunshine. Daylight savings time had just started so I knew that I would be able to get a full day on the water. I headed down to one of my favorite rivers to see about some trout and pike. I was well armed although I must admit that my fly boxes were rather barren. I haven’t been tying as much as I should, but oh well, these things happen.

I tried drifting an egg/bugger combination but that got no takers. Dead drifting junk this time of year is a very effective means of farming up some fish. The normal spots for that didn’t produce. It was time for a change.

I lengthened the leader some and poked around in my streamer box. I thought to myself “Thank Bob!” and put on a nice flashy chartreuse and white Clouser Minnow. The water was that nice “steelhead green” that is perfect for early season fishing. I started swinging that fly through a nice big pool. I was losing myself in the moment. The sunshine, the water, the birds singing, and the familiar cast, swing, strip repetition were all invigorating my soul again.

Then I felt the tug. A good solid tug. A fish! My first fish of the year! On my birthday!

It was a solid fish I could tell. I got the fish on the reel and started the tug of war. I had 2X tippet on there so I knew it wasn’t going anywhere but there is always that moment of what will happen next… It came to the net quickly enough. 18” of wild brown trout.  It was just what I needed. After some pictures it swam slowly away back into the depths of the river.

I ended up seeing some friends later that day and fished with a couple of them. We didn’t get anyone else to play with us (although I thought Ken was going to have a coronary at one point because of one that rolled his fly). All in all, it was a great day.

Just what I needed: a cleansing.

Posted by flypredator at 3:23 AM 2 comments:

If you have any questions or comments or would like to book at trip with Master Class Angling (my guide service) please email me at muskyflies@gmail.com! I provide high quality guiding on Lake Champlan and in Vermont for warm water species (and the occasional trout too!)

Promote Your Page Too